A MASS AT THE VALLEY OF THE FALLEN

Sensible, modern governments work democratically for the betterment of all citizens by bringing the resources of science to bear upon the ancient woes of mankind and by waging occasional wars which are not really wars but wars against wars. When the wars are over, they build sensible memorials for the war dead. Sometimes there are redoubled acres of plain, white slabs; and sometimes there are non-sectarian regimental monuments, covered with draped flags, marble cannon, winged victories and names. Acceptably pluralist sculpture allows the portrayal of Mother-Country-clutching-to-her-bosom-the-broken-form-of-Idealized-Youth or, equally nice, the Spirit-of-the-People-holding-aloft-the-torch-of-Unextinguishable-Hope. There is usually an Unknown Soldier, too, buried with wreaths and Eternal Flames, in order that the nation might symbolize her perpetual grateful memory of him whose name she cannot remember. 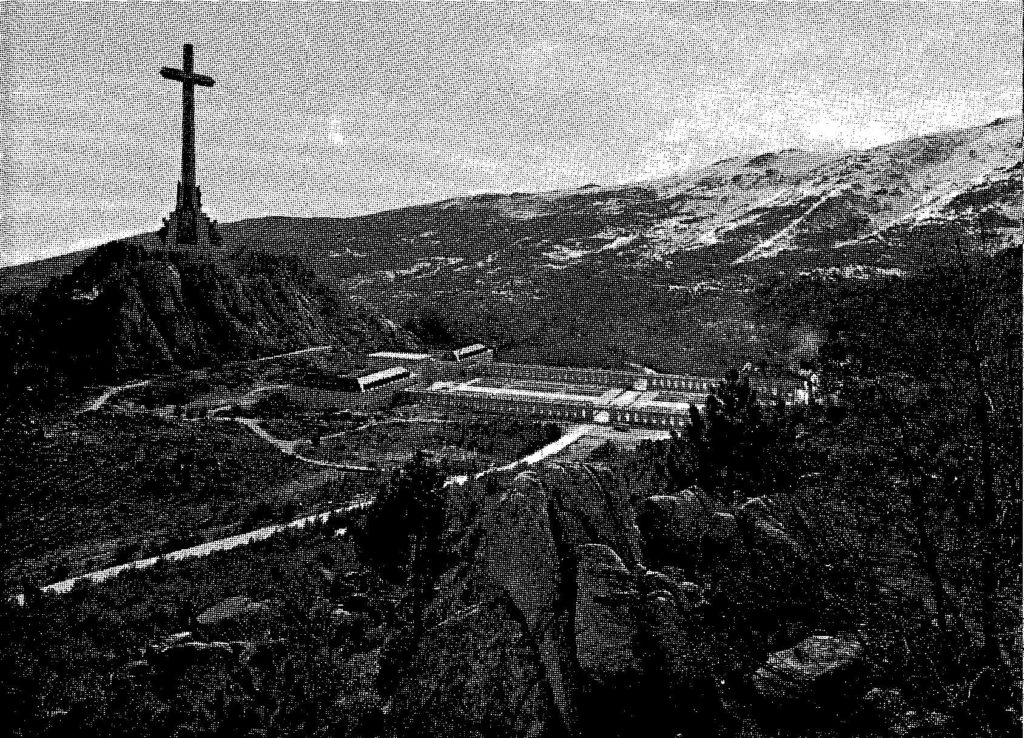 Sensible, non-sectarian citizens come to look at such things now and again. They remind themselves of what a terrible waste war is, thinking about those poor young men who wanted to have it good like everybody else but got stuck in the army instead, and then wanted to get out after a normal hitch including the usual R and R and porno and native whores (because they’re only human) but are lying here instead. Obedience, sacrifice and death — funny things that happened to them during their pursuit of happiness. Tragic things. Wrong things. In any case, dulce et decorum and so forth is all in Latin, which sensible, non-sectarian citizens do not learn.

Francisco Franco Bahamonde is not a very sensible man, as this world judges; and neither were those who in their thousands followed him out of the cities and villages of Spain with hymns and rosaries and guns, to say not to all the non-sectarian things, and to say it with their lives. They had a King, Who is Christ, and a citizenship, which is His Mystical Body; and there were no unknown soldiers among them, for they were the army of Him to Whom the hairs of their heads are numbered. There were soldiers in that army who could not die, like the lady who led astray a Communist column in front of Avila and who could never be found afterwards, but whose likeness is above ten thousand altars; and like the man in white garments who appeared at a lonely machine-gun position in the mountains at a moment when the Reds were about to overwhelm its few Nationalist defenders, and who held that gun until the enemy retired in confusion and in fear, not knowing that the son of Zebedee had fought in Spain’s battles before. But most of the soldiers had not yet put on incorruption, and many fell. For them General Franco and the people of Spain have built their own kind of monument.

In a valley among the pine-forested slopes and barren peaks of the Sierra Guadarrama they placed it. A mountain, rising, completes itself in a gigantic cross, towering and graceful, drawing every eye to itself and dominating the valley from every vantage point. Midway up the mountain’s slope stands a wide facade whose portal is surmounted by a draped and somber figure, bent in mourning over the body of a slain man. One cannot tell what these sculptures signify until one is immediately before the portal. There perspective annihilates the distance to the summit, so that the remote, tremendous cross seems to descend and stand directly over the human figures; and one’s eyes are opened to the Pieta. Beyond the portal, under the foundations of the cross, a cavernous basilica extends into the heart of the mountain, an immensity of gray, rock walls punctuated with Lady chapels and ablaze with tapestries of the Apocalypse. Dark, militant angels keep watch with the fallen, marking their Holy Saturday as they rest from one victory, wait for a greater. Above the high altar, the Man of Sorrows opens His arms on a great cross of gnarled pine, and over His thorn-circled head arches immensely high in domed mosaic firmament, hued in light on light of transfigured risings, the resurrection of the dead. From the apex, light radiates down upon altar and sanctuary, into the transepts on either side, and behind into the dim recess of choir that fills and echoes with ancient chant as antiphon of manhood’s bass answers psalm of childhood’s clear soprano. Outside, behind the mountain and looming cross, roofs and cloisters extend their shelter to the Benedictine community and school in whose care the national monument reposes. Fitting, that the builders of Christendom should pray for its defenders.

Every day they sing Mass in the national memorial, Mass which is its very life and finality as a memorial, Mass at which it was my joy this last summer to assist.

I wondered as I entered and made my preparatory prayers, the density of Christian iconography pressing in upon my senses and through them disposing my soul, how many governments were left in the world that would dare (or care) thus to acknowledge Jesus Christ publicly. I wondered when again men would have the opportunity to fight for a government that would remember their sacrifice in this way. I thought of the bare ecumenical chapel, no doubt located just off public property, in which Mass might be said for my soul, if I should die in my country’s next war. I wondered how a public authority comes to be in such a state that it would memorialize me because I died and because I wore its uniform but not because of any of the things that matter in Eternity, where I would be by then, wondering, perhaps, if God’s adoring angels had ever heard of the First Amendment.

I lost my train of thought because the basilica had begun to resound with Gregorian chant. Monks professed to choir were intoning an introit. A stately column of celebrants and acolytes was entering the sanctuary. Incense was beginning to rise and invest the place of sacrifice. I heard the words that begin the rite, but my mind had fastened on something else. Sacrifice. That was it. That was why the Mass had to be the raison d’être of this national memorial. Mass is the act of the Mystical Body, which is the fellowship of His sufferings. “For unto you it is given in the behalf of Christ, not only to believe in Him, but also to suffer for His sake,” St. Paul said. The manhood of Spain had suffered and died during three terrible years, but their sacrifice (because it was love; love is consubstantial with sacrifice) was one mystically with the sacrifice of their Head, and His sacrifice had bought back the world. Obedience, sacrifice and death—not wrong, then. Perhaps tragic. But, no, transcending tragedy, caught up and lost in the depth of the riches, the mystery of redemption. If not, what was Calvary all about?

A collect had been sung. We were listening to the lessons from Holy Scripture. It began to get through to me that everything was in Spanish. I thought back over the form of the rite that we had passed through thus far. No mistake about it: it was the New Ordo. There was also no mistake that it was solemnity, celebration, representation, drama—and beauty. The discovery, after initial delight, led me into a mounting fury. So, it was not all Rome’s fault that back home Mass was a bristling horror. It was not the New Ordo that had robbed us of joy in the house of God. Next question: what is the matter with the American clergy that they have made everything so ugly? Why do even our altar boys slouch around and scratch themselves and half the time aren’t so much as properly vested? Why are our choirs disbanded, our churches stripped, pieces of junk that wouldn’t make decent bridge tables stuck in front of our altars? And if renewal is not an excuse for their travesties, why don’t we tell those so-called shepherds of ours what they can do with their…But then, this was hardly the time to lose charity altogether. After Mass, however, I would think further on the subject.

Sermon and offertory slipped by as I was saying a rosary. I make a point of praying the rosary at Mass, lest the advocates of participation should think that I do not know what is going on in this holy event and how it is that man participates in it. I pray to imitate what is contained and to obtain what is promised. 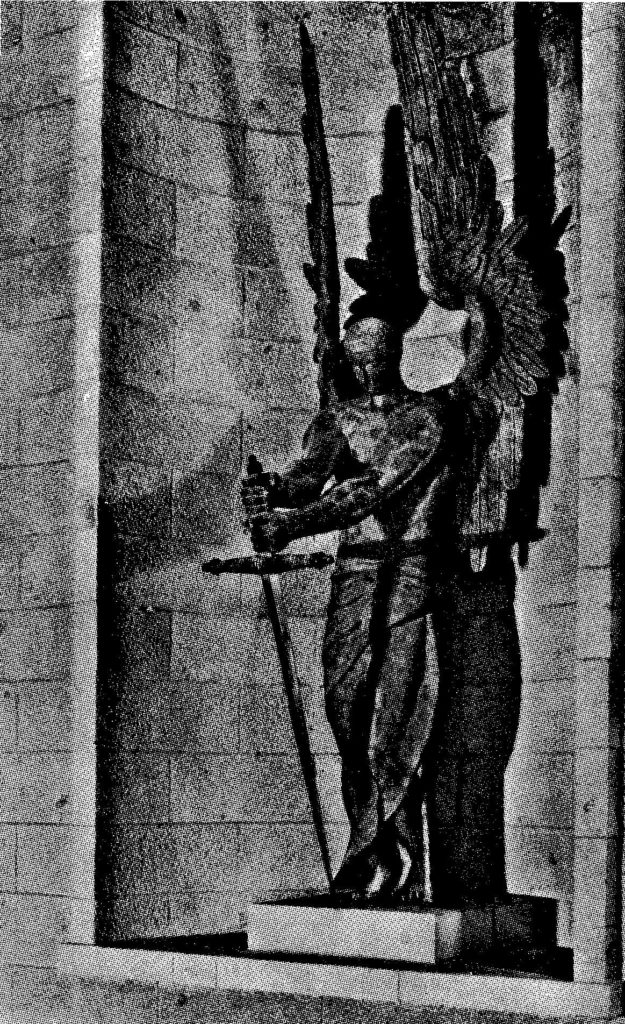 pale green chasubles hanging straight from shoulder to heel upon the bearers of Melchisedek’s priesthood. Bathed in light from the high dome above, they begin to sing the Eucharistic prayer. How obvious, after all, that it should be sung. Otherwise concelebration is a cacophony of husky voices. Let them chant, and liturgical perfection is restored. But I dismiss aesthetics and yield to prayer, readying my whole soul to adore the appearance of its ultimate Good.

There is a jangle of bells and suddenly, darkness. Falling through the vastness of blackened space from dome to altar is a single ray resting upon the principle celebrant. His hands rise, lifting, holding immaculately gleaming in that pure, dramatic light Divine Existence visible. Suspended again between Heaven and earth is He to Whom forever they are united who in three terrible years cast away their lives, mocked and judged by the Sanhedrin of world opinion as cruelly as he was mocked and judged by the Sanhedrin of the Jews, united by sacrifice in one fullness of eternal life to the pulsating, coursing, eternally loving, eternally pierced Heart of Jesus, Now I begin to understand something more. In this valley, where this moment He is lifted up, lie also the bodies of His erstwhile enemies — buried war-dead of the Communist side. Looking upon Him whom we crucified, I know that it was not because of nationalism, not because they, too, were Spaniards, that their victors remember them here. It is because He — and they who are united to Him in one mystical life—died for the enemy also. I wonder: how many graces were won for the souls of Communists by the deaths of their victims? I remember that when the sky was darkened and the veil of the Temple had been rent in twain, some lout of a centurion trembled and, staggering away from, the crap game over His vesture, cried out, “Truly this man was the Son of God.”

The darkness around the altar is refolded in light. Twelve priests rise from their knees. Let us proclaim, they say, the mystery of faith.