The Americanization Of J. Christ

It was only a matter of time before we should be given this new Mass for civic occasions, because by now the liturgy club is really interested only in politics. Recall, for example, that the last meeting of the Liturgical Conference was devoted to the topic of revolution, the rationale for which was an elaborate business about liturgy expressing the needs of contemporary men in concrete situations of injustice. But the reason for it, of course, was the simple fact that politics is the ersatz religion of our time, and those who lose supernatural faith most commonly turn to the going ersatz. Concretely, moreover, Catholic priests have been going this route for the last decade by means of an intermediate stage where social change and religion, infused contemplation and building better mousetraps are all one and the same thing, as a certain French Jesuit never tired of saying.

It is this intermediate stage which explains why the new “Mass for Independence Day and Civic Observances,” to give the thing its exact name, has nothing remotely to do with the tangible America nor with its or any other nation’s most elementary concerns. It is a Mass containing no prayers for God to bless America, damn America, convert America, spare America — it never mentions America! It never asks God to prosper religion or restrain vice, avert famine or secure peace. It prays only for something like Big Hearts and Broad Horizons, as one might expect in a Mass for Building-the-Earth Day. Do I exaggerate? Have a look at the two Collects from which the Celebrant may choose:

Father in heaven, giver of freedom and love, you sent your only Son, Jesus, to restore freedom and brotherhood to a divided world. Keep us faithful to the mission of Jesus Christ so that generations after us will follow paths of justice and peace.

Here two points. Freedom and brotherhood are new to me as motives of the Incarnation, though of course one can say that these things, rightly understood, flow from It insofar as they are super natural and benefit from It insofar as they are natural. But to say that, one must introduce distinctions which — this is the first point — are not in the text. Instead, we find the slogan-words of Wilsonian progressivism tacitly elided into their theological homonyms, which in turn are made immediate motives rather than remote consequences of Christ’s work. Thereupon (second point), we are told to pursue these homonyms—not “so that generations after us” will benefit from our example, no sir — but “so that” as a result they “will follow paths of peace and justice,” as though grace were hereditary and physically cumulative! Now behold the other possible collect:

Father of the family of nations, open our hearts to greater love of your Son. Grant that our national boundaries will not set limits to our love. Ward off the pride that may come with possession and power. Give us the courage and the strength to build a nation that serves you and the family of man.

First look at the form of these petitions: nowhere in this Mass is God ever called upon to do anything in the extramental order, as though His intervention therein were all but impossible. Rather, He is asked to do things in our psyches. Thus God is not asked to make peace, for example, but to give us good vibes so that we can make it. Second, look at the subject matter of these petitions: as though the world’s most fervent race of international do-gooders needed to be told to cross boundaries; as though a nation flabbergasted by the failure of its power needed to be warned, here and now, against pride in power! One might suspect this author had been walled-up somewhere since 1959. And what sense does it make to talk about “building” a nation that will serve the “family of man”? No nation does any such thing. A nation can, of course, serve God, but is the text serious here? There is only one way a secular state can serve God: by ceasing to be a secular state. Evidently that is not what the author had in mind, to judge by his Preface.

Father, all-powerful and ever-living God, we do well always and everywhere to give you thanks through Jesus Christ our Lord. He spoke to men a message of peace and taught us to live as brothers. His message took form in the vision of our fathers …

Are you getting this? “His message took form in the vision of our fathers.” Never mind the literary question of how many metaphors have been mixed here; watch the theology. What takes form is previously formless, right? Or it has sloughed off an older form. So in other words, the Gospel was formless or outmoded until it was hammered into institutions by Jefferson, Madison and their colleagues. This is blasphemy. You say a Catholic Mass can’t mean that? But this one says it. Moreover, this sentence was very carefully revised. As first presented by Bishop Malone’s liturgy committee (you remember Bishop Malone; he’s the one who said the Mass should be like Laugh-In), this sentence read, “His message took flesh in the vision of our fathers …” How much clearer do you want it? Then Malone’s draft was revised into its present form by Auxiliary Bishop Dougherty of Newark, who holds an S.T.D. and an S.S.D., neither of which can be ordered from cereal boxes, and who presumably knows one word from another. If the learned Auxiliary had wanted to say, “His message informed the vision of our fathers,” he could have said it. (It would have been rather dubious history, but many American Catholics believe it; indeed, except for the readers of this magazine, I can think of few who would have blinked an eye at it.) One must suppose, therefore, that he consciously intended to say something else, and the evidence is right in front of us that what he intended to say was this: Christ’s message became coherent and took historical form precisely in Americanism. This is heresy, to be sure; but can you think of an alternative explanation? I’d like to hear it.

Meanwhile this heresy is perfectly concordant with everything else we have read in this Mass. If you fail to draw a hard line between the natural and the supernatural, you inevitably end up with a God who cannot intervene and a Gospel that evolves. As long as it’s evolving, why not make the Spirit of ’76 one of its stages? Why not, indeed. On this very point, note what Bishop Malone said in presenting this text to his fellow bishops: “Every effort has been made to avoid … indiscriminate identification of American freedom with the biblical freedom of God’s children.” It doesn’t matter that “every effort” failed. What matters is that the problem was invented at all! To any Catholic with a grasp of what supernaturality means, this “identification” would be sheer nonsense. To Bishop Malone, though, the identification is splendid provided it is discriminate. This is an oxymoron. Perhaps the bishop meant to say “indiscriminate analogy” (or “comparison”), in which case there is no oxymoron, but neither is there a problem. Everybody knows an analogy exists between natural freedom and supernatural liberty; the rub comes in the differences.

His message took form in the vision of our fathers as they fashioned a nation where men might live as one.

The authors of the Federalist would be rather surprised to learn that they were designing a nation “where men might live as one.” Their idea, as I recall, was to let men live as much as possible as themselves, being “one” only in the smallest possible number of things, like death and taxes. Certainly they didn’t want men to be one in Faith. In this aspect, at least, American freedom, being license, is neither identical nor analogous with biblical freedom; it is the very opposite of it! I am at a loss, therefore, to understand how Christ’s message “took form” in the American “vision.”

But while the reasoning of Bishops Malone and Dougherty may remain elusive, the irony of their position is rich and plain. Both are known as “liberals” in the American hierarchy, Bishop Dougherty being well regarded for his stand against the Vietnam war. They imagine they are worlds away from integrism or facile identification of the powers that be with the Power Who Is. In reality, however, they are more wedded to their political system than Richelieu was to the throne of France. At least it never entered the baroque Cardinal’s mind to claim Christ’s message had taken form in the coronation of Hugh Capet! What no integrist would ever have said is now proposed as lex orandi by those whose politics just happen to be “progressive.” Through a Teilhardian back-door, the fusion of Church and state returns with a vengeance, as modern, democratic government is declared to be the very “form” of the Gospel! “We have no King but Caesar,” cried the Jews and the Nazis; “we have no King but Democracy,” answers the Mass for Independence Day, in a dialectic I for one disdain to enter.

But will the American Church enter it? That is now the great question, and Mass for Independence Day is only one symptom of its urgency. But because the Mass is in black and white, it is a very important symptom. Last November the American bishops voted 214 to 6 in favor of this Mass (whose approval is now pending in Rome — oremus) and obviously they had not attentively read it. I say “obviously” because I don’t think 214 bishops really believe in the “theology” of these prayers, but I do fear they are hazy enough on the subject not to have noticed what was at stake. They are like many other Americans. We think it absurd if somebody talks about “building” Italy or Saudi Arabia into a nation that will serve the whole human family; why don’t we find it equally absurd to talk this way about the United States? There is a bogus messianism that runs deep in the way Americans think about their country, and who will cure us of it, if not our bishops, the servants of God? Perhaps the Servant of the servants? 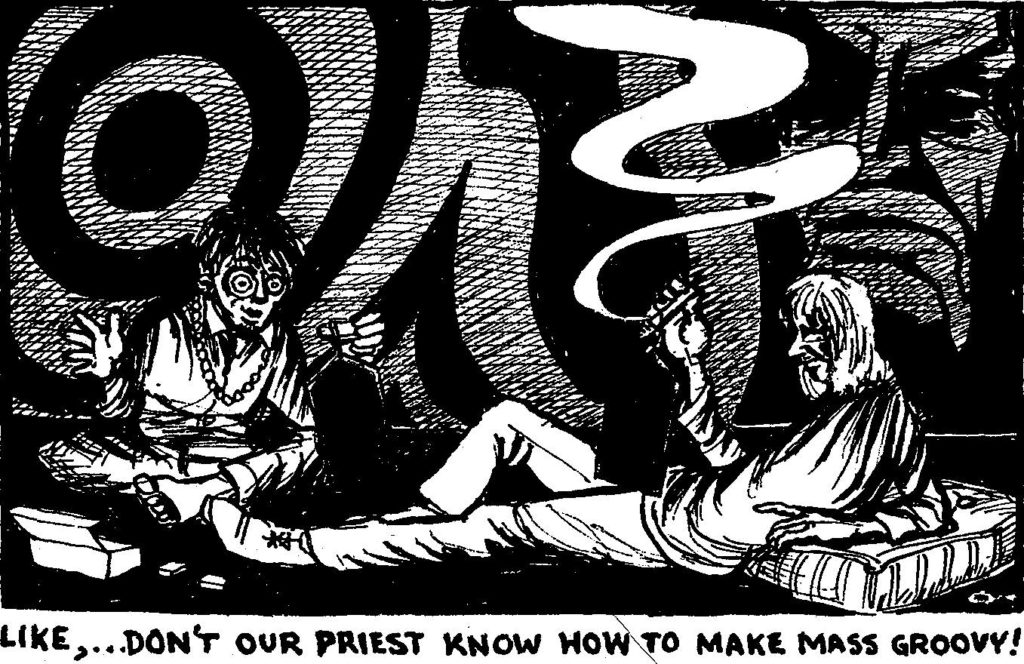